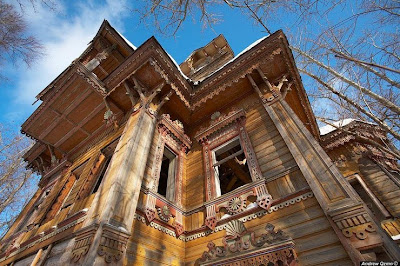 The story of these houses is quite interesting. They were built by two friends, local peasants who left their villages for St Petersburg, rose from construction workers to propritors of large construction businesses (in fact one of them had worked as contractor during renovation of Winter Palace in St Petersburg in 1890s). 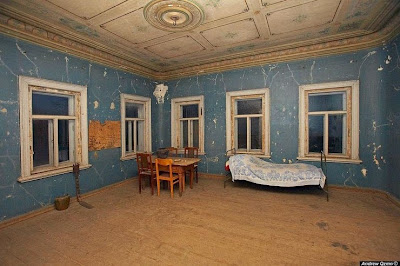 Both of these peasants quit St Petersburg to retire in their home villages and built these estates there. Both houses were built without an architect, by these peasants themselves, but one used plans and drawings of fashionable Russian architect who was one of the creators of this ”gingerbread” Russian art-nouveau style of the 1870s-80s-90s. The houses stand 18km apart from each other in now abandoned villages. The russians plan to open guesthouse / museum / hunting lodge in one of the houses they are renovating. The other one is a private summer house of an artist from Moscow.